On May 22nd, 1973, Bob Metcalfe employed the term “Ethernet” in a memo he wrote at PARC. Exactly 40 years later he made the opening keynote presentation and while he is heralded as the inventor, Bob emphasized the roles played by close colleagues as well as hundreds of Xerox PARK employees.

Transitioning from a concept to a network technology was a tough call, but the vision was clear: move from a box-centric model to a distributed computing model that would eventually allow hundreds of PCs to be deployed on every desk, linked to shared printers and servers; get rid of the “rat’s nest” of cables. The challenge included the need to enable clocking in the data stream, which was enabled using Manchester Encoding, the key breakthrough, followed by Collision Detection (CSMA/CSCD) and the 6-byte address. In addition, when there was the not insignificant 10-year challenge that came from IBM and it’s Token Ring technology, but Ethernet and open standards prevailed over Big Blue. David, not Goliath, won the LAN war.

Looking forward, Bob indicated that he expects to see much-needed disruption arrive in video, mobile and embedded traffic as well as in the energy, health and learning sectors.

The first day comprised an additional twelve panel discussions and it would take too long to summarize all the individual contributions, so we will focus on the take home messages on which all panel members agreed.

Standards are good, but open standards that adapt over time enable evolutionary progress and that is what Ethernet has given us. It runs over all mainstream media, from coax and twisted pair through the wireless backhaul. The technology has evolved: for example, collision detection has left the scene and been replaced by network intelligence at level 3.

But, and this is a key message, the packet format hasn’t changed, nor has the type field, and that has allowed innovation to be built on a foundation that is not only robust, but also one that provides backwards compatibility. The frame is the jewel in Ethernet’s crown.

The technology has clearly stood the test of time. It underpins Wi-Fi and wireless backhaul in cellular networks; data rates have ramped up from 1G to 10G and 40G and there is no obvious reason why they should stop. In addition we now have Carrier Ethernet, which brings standardized service offers to the markets, thereby enabling end-to-end Ethernet: desktop to LAN to WAN and the Cloud and back to the desktop.

In a nutshell, Ethernet equals Connectivity — both in the enterprise environment and the service provider space. It’s a key enabler for tomorrow’s Connected World.

The innovation process and the environment in which Ethernet was conceived were discussed in a morning session. Xerox was seen as a company that generated interesting ideas but did not carry them forward to the marketplace. Government funding of labs like PARC was a way of taking good ideas and marketing them successfully, but government funding has diminished. Investment companies want a fast return and that does not allow basic research to be conducted. Major industrial research labs like Bell Labs have disappeared. There is gap and we run the risk of the innovation well running dry. Another issue is the fact that today most everything is inter-disciplinary; it doesn’t fit into neat defined boxes.

Other sessions focused on standards, the status of Ethernet and the way ahead. The ability to bridge the former gap between the LAN and the WAN means that Ethernet is becoming a universal language. It increasingly looks less like a networking technology and more like a service offer and this has serious implications for carriers.

Virtualization, which removes the rat’s nest in data centres, was also discussed at length along with the rapid take-up of the cloud by the market. This development has enabled the fast deployment new services, for example, getting Exchange up and running in five minutes versus two weeks. But the best is yet to come. Now we have virtual networks, so there is no need to take deep dives into network technology. And in future we’ll surely see kids in their teens and early 20s coming up with wild ideas, the best of which can be brought to market in short timeframes.

Along the way we had various one-liners, e.g. “Nothing happens until something is sold”, as well as a poem about the spanning tree protocol and a limerick about standards. On privacy: “it’s the person who hacks into Google you need to worry about not Google”.

The last session of the day saw big believers in Ethernet including a merchant silicon vendor – Broadcom – discussing SDN and silicon photonics, HP’s networking division (including 3Com which Bob Metcalfe referred to the next day as having taken over HP), Brocade, and Arista, which makes high-performance switches. Among the predictions were changes in healthcare including a chip in every person to monitor our personal health and functions.

The last word in this summary of a day that was packed with interesting reflections and ideas from the 40 participants goes to PARC, which is where the whole thing started. PARC’s culture was based on the ability to nurture practical creativity and today it is continuing in the Emerging Networks Consortium, which is an initiative formed to advance the development of the next-generation Internet based on Content-Centric Networking. This shows that the organization continues to be in the business of breakthroughs.

The second, press-only day saw presentations on future uses of the Internet from USIgnite, a private-public partnership and discussions around Ethernet’s role in the cloud, in SDN, and the datacentre – who knew that most network links in the datacentre are still only 1Gbit?

New words we heard include ‘locavore’ – someone who selects products grown or created locally – applied to facilities such as AOL micro-datacentres moved close to end users to minimise latency. Good security quote from Brian Smith, Click Security: “In last 20 years we have been armouring the sheep. Now we need to start hunting the wolves.”
News: the creation of the Carrier Ethernet Forum ti help create standards for interoperability between datacentres. Also: the number of physical Ethernet ports is on the decline, as the growth is in wirelessly-connected devices – tablets, phones etc. – while sales of laptops and desktops flatline.

Wireless debate on next standard 802.11ac raises the question of whether it will be a bit of a damp squib. It offers faster throughput but not without disadvantages, especially when several access points are densely packed. Enterprise demand isn’t expected to arrive until next yea at the earliest, but clients are ready now so take-up more widely is likely to be quick. 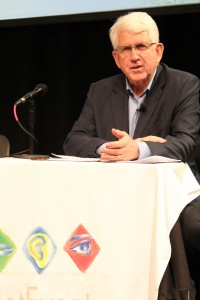 Bob Metcalfe’s keynote wrapped the event – certainly a highlight, possibly the highlight of the show. The audience was captivated by his war stories – like being told the commoditisation of Ethernet would doom 3Com. In fact, the volumes meant the company made even more money. “3Com is most successful acquisition HP ever made,” he said to applause.

Metcalfe pointed out that the reason Ethernet first ran at 2.94Mbps was because there wasn’t room on the network interface card for a clock chip, so he and co-inventor Dave Boggs derived a signal from the system clock.

He told the story of how Ron Crane was tasked with developing the Etherlink chip. It was late as Crane was working on designing in protection against lightning, which was neither in the spec nor asked for by customers.

3Com then sold 1,000 cards to a New York bank which hedged its bets by buying 1,000 cards from a competitor. Lightning struck, the 3Com cards carried on and the others were fried. 3Com sold another 1,000 cards as a result.

“Why did 3Com win in those days?” Metcalfe said. “We had a time machine. We went to Xerox PARC and knew what the future would look like. Others such as Ralph Ungermann worked on cards for dumb terminals but we knew there would be PCs on everyone’s desks.”

And why would Ethernet keep getting faster? Metcalfe’s philosophy is: “Build it, and they [the applications] will come”.

The session overran by about half an hour – but it made a great ending for the event.