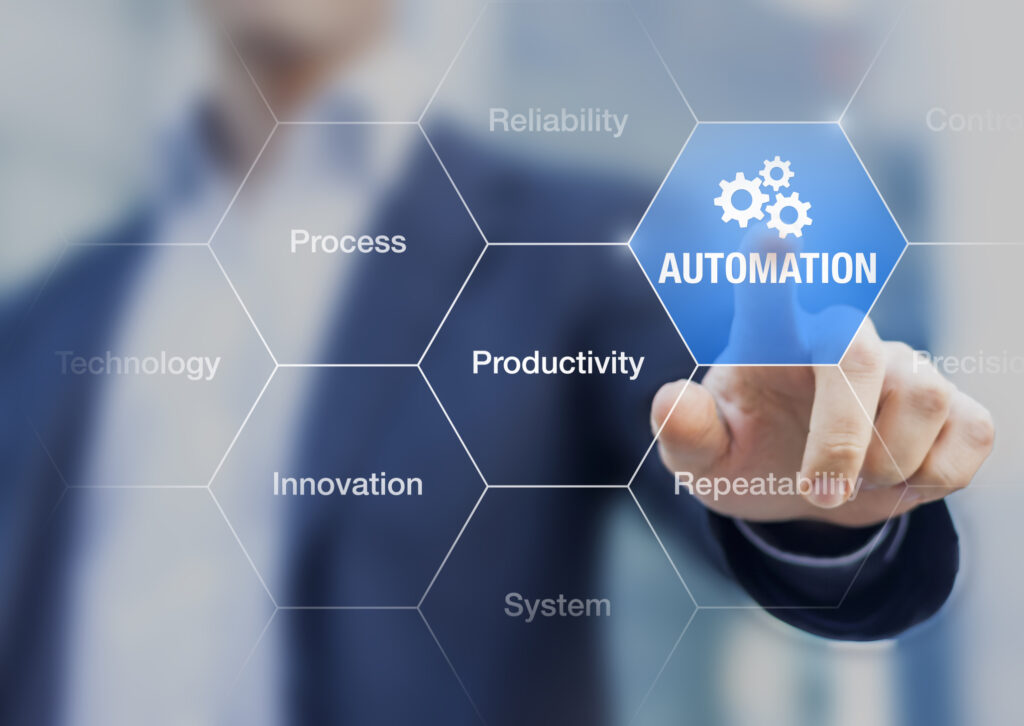 The intelligent way to automate the network

What part can AI and ML play in the automation of the network? We asked a panel of experts for their thoughts on the future of smart connectivity.

AI and ML might just be the most two frequently bandied about buzzwords in technology. So believes Scott Raynovich, Principal Analyst and Founder, Futuriom. That’s not to say he doesn’t see them as important terms – just slightly overused in sometimes inappropriate contexts. One thing he is sure of, AI and ML have a central role to play in advancing network automation.

“With ML, you can spot patterns and then automatically protect networks, as well as respond to network events, letting networks correct themselves without human intervention,” he says. “AI and ML can be trained to learn about specific patterns or faults that might occur, and then make automated decisions about that. There is also intent-based networking where we are programming the network to have an intent-based response. This might, for example, help a video application which must always have a certain amount of latency so that we can see each other.”

Raynovich sees the worlds of data centre networking, public cloud and telco cloud starting to become more intertwined: “We’ve seen announcements where some big players such as VMware and Microsoft are demonstrating cloud platforms for telcos that can run anywhere, in a private cloud or a public cloud. Of course there are automation challenges in all these areas where budgets are finite, deployments are ramping fast, and bandwidth is surging. Many of the services are dynamic.  People are going to a website, they’re turning a service on and the networks have to be provisioned. We need a certain amount of automated response here. And it’s going to get even crazier as we add 5G. Millions of devices are going to be connected, phones, cameras, edge compute nodes, all sorts of things so the only way to handle 5G is to automate it.” 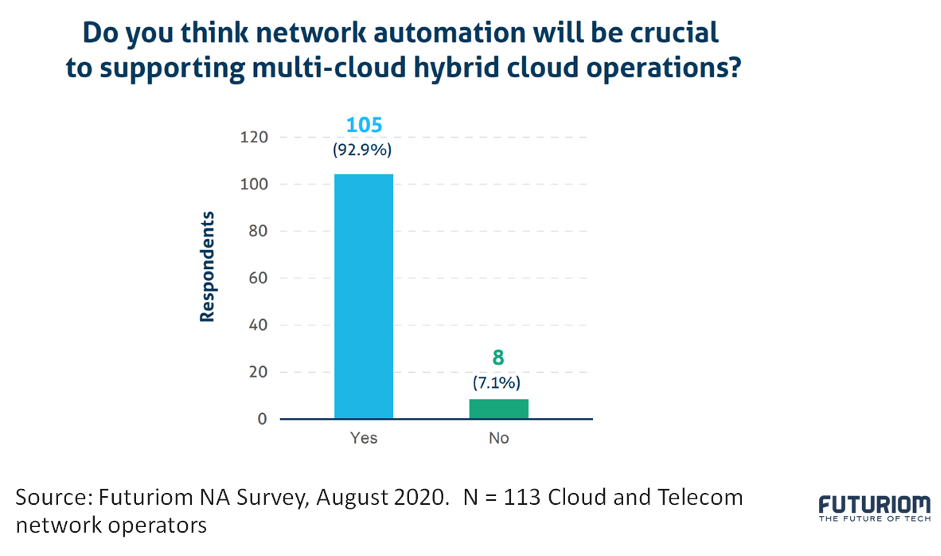 In August, Futuriom surveyed a mix of cloud and telecom network operators. “We asked them if they thought network automation will be crucial to supporting multi cloud and hybrid cloud operations,” says Raynovich. “It turned out 93% don’t believe they’re going to be able to roll out these services unless they have automation. They can’t possibly manually configure those services.”” 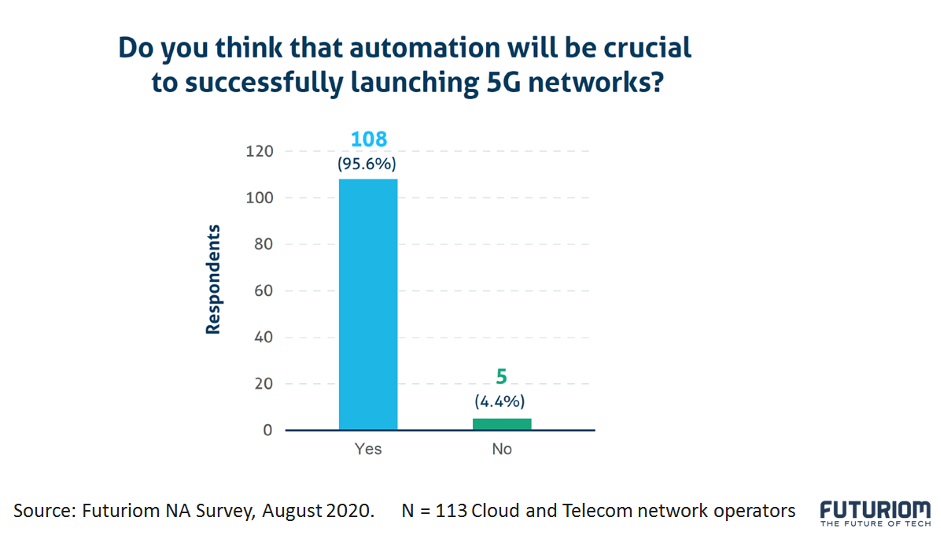 Figure two: The role of automation in launching 5G networks

“With 5G, we asked if automation is crucial to successfully launch it,” he added. “An overwhelming 95.6% said yes. They can’t possibly connect so many things and manage them and secure them without the aid of some sort of automation.”

A panel of industry experts was convened in order to ask them why network automation is important to them.

“The easy answer is that people want automation because it drives down their opex and their costs go down,” points out David Iles, Head of Ethernet Switch Technology with NVIDIA. “Plus it’s the only way that some of these large data centre operators can scale, and keep up with demand. There’s also a need to be able to shift resources from public to private and back and forth in an automated fashion. Automation can deliver subtle change, not just measurable in dollars and cents.”

Ron Nevo, CTO of cPacket Networks, the maker of network-aware application performance tools, says it depends if you are talking about deployment or operation: “When you operate the service, that is where AI in general and machine learning specifically play an important role in identifying that something went wrong, before applying an automated action.”

Umesh Mahajan, SVP & GM with VMware argues that you need to build infrastructure first in software-defined form, facilitate an intent-based policy, then use automation on top of that: “Automation can only happen when the infrastructure supports it properly,” he says. “Then it’s about how do you operate it? How do you mine the data? That’s where it becomes very interesting with AI and ML.”

Greg Mayo, Chief Architect in the CTO Office of NETSCOUT, fears that 5G may be adding to the task of the telco in automating networks: “It’s another leg of the stool,” he explains. “We have all the complexity of hybrid cloud and now we’re throwing in a complete new networking architecture. 5G inherently has closed loop automation built in so telcos are really having to deal with a lot at once.”

Peter Phaal, President of traffic management specialist InMon, says the value of automation to telcos lies in allowing them to flex capacity as demand changes in a dynamic way: “We’ve been doing this for a long time in the networking space,” he says. “We were trying to do performance optimization in software. And we realized that we really couldn’t achieve that goal by cobbling together ad hoc measurements the various vendors provided. So we decided to collaborate with merchants, silicon vendors and equipment vendors to integrate instrumentation into the hardware. We’ve been working with NVIDIA, and they contributed data plan telemetry to provide visibility into dropped packets.”

With the conversation switching to the network edge, Iles of NVIDIA ventures that the term ‘edge’ may be the most overloaded in the industry: “Everybody has their own definition of edge,” he says, adding that for NVIDIA, the edge is where AI really counts: “There’s the training side and there’s the inference side where you can react to things very quickly,” he says. “I think it’s possible that network automation will start adopting AI principles.”

Mahajan of VMware argues that the edge is not where automation expertise lives, and that when people are working from home they don’t want anything to do with touching boxes or managing IT in any way: “This means everything has to be centrally managed,” he concludes.

Nevo of cPacket says that with automation, some things are going to be in the edge, some in a data centre, some in the cloud: “If a user complains about latency, it can be something that is happening at the edge or it can be the communication to the authentication service that is running in the cloud or in the data centre,” he points out. “You can’t just solve the edge problem without understanding how the service chain spreads across all of your network.”

To have good automation you need observability, adds Mayo of NETSCOUT. “And the data has to be good data because you if you run AI against bad data you’re not going to end up with good results.”

He adds that AI and ML are used so often in a buzz word context when people should really just be talking about automation: “I really like to focus on the results of automation and use AI as a tool, and I get frustrated when people want to just talk about AI for the sake of talking about it.”

“If you’re looking at pet peeves I think it is that people want to run before they walk,” says Iles of NVIDIA. “I think that automation comes in steps, and you need cruise control before you get to lane keeping assistance then you get to the true self driving car. And you need good telemetry. You don’t fly a plane without radar and you don’t have a submarine without sonar, and the network’s no different. You got to have good telemetry to drive it well.”

On an optimistic note, Phaal of InMon believes that people are settling on a common set of building blocks that dramatically accelerate progress in automation: “Because you don’t have to try and solve a problem in different times within different sets of blocks,” he says. “Everybody’s got x86 CPUs, they’ve got a commodity along with basic switching, and a common set of measurements. So now with that common toolbox I think we’ll start to see a rapidly emerging ecosystem of very effective solutions because they don’t have to cope with the complexity of a diverse set of components.”

Last word goes to Iles of NVIDIA: “To go back to the first question of where are we on network automation, I refer again to the self-driving car analogy. I think we’re in level one of five tiers, where it’s driver assistance. We have great tools out there for network automation that are mostly the big scale stuff that we see come out of the Server Automation world. We see that as level one, and level two comes as we start standardizing and getting better visibility to enable that closed loop operation. And while we are about it, let’s not forget that that software has to run on something, and the hardware that it runs on can make a big difference. At NVIDIA we have a strong point of view that when it comes to any kind of AI workload, it’s going to just work better on a GPU versus a CPU. And so you will find that even things that are software defined, things that run in a virtual environment, they run on GPUs. And that does make a big difference when it comes to this highly parallelized model for AI. So, hardware does matter, even in a software world.”