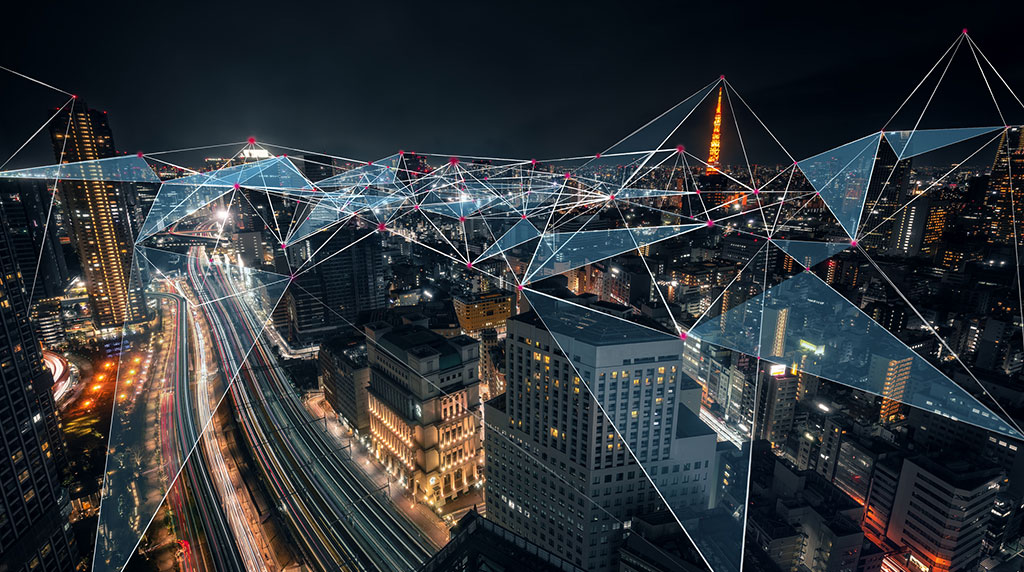 So what is hot in networking right now? What innovations and highlights have we seen in a year that has unfolded in such unpredictable ways?

Healthcare workers, emergency services teams, supermarket workers and garbage collectors – these are the real heroes of COVID-19. People who have kept the world running throughout the crisis. But let’s also add the networking sector to that list, argues Jeremiah Caron, Global Head of Research and Analysis, GlobalData.

“We’ve seen a rapid and instant shift in the way businesses operate, in how we all work, in how we deal with our personal lives and interact with our friends and family,” he says. “All these activities have never depended more upon network technology than they have over the past couple of months. The performance of that technology has been outstanding. I think we should all be really proud to be a part of an industry that has been so integral to us getting along, not just from a business perspective but as human beings.”

Research conducted by GlobalData both before and during the COVID crisis (Figure 1 and Figure 2) offers intriguing insights into how the key technology priorities of enterprises have been affected. 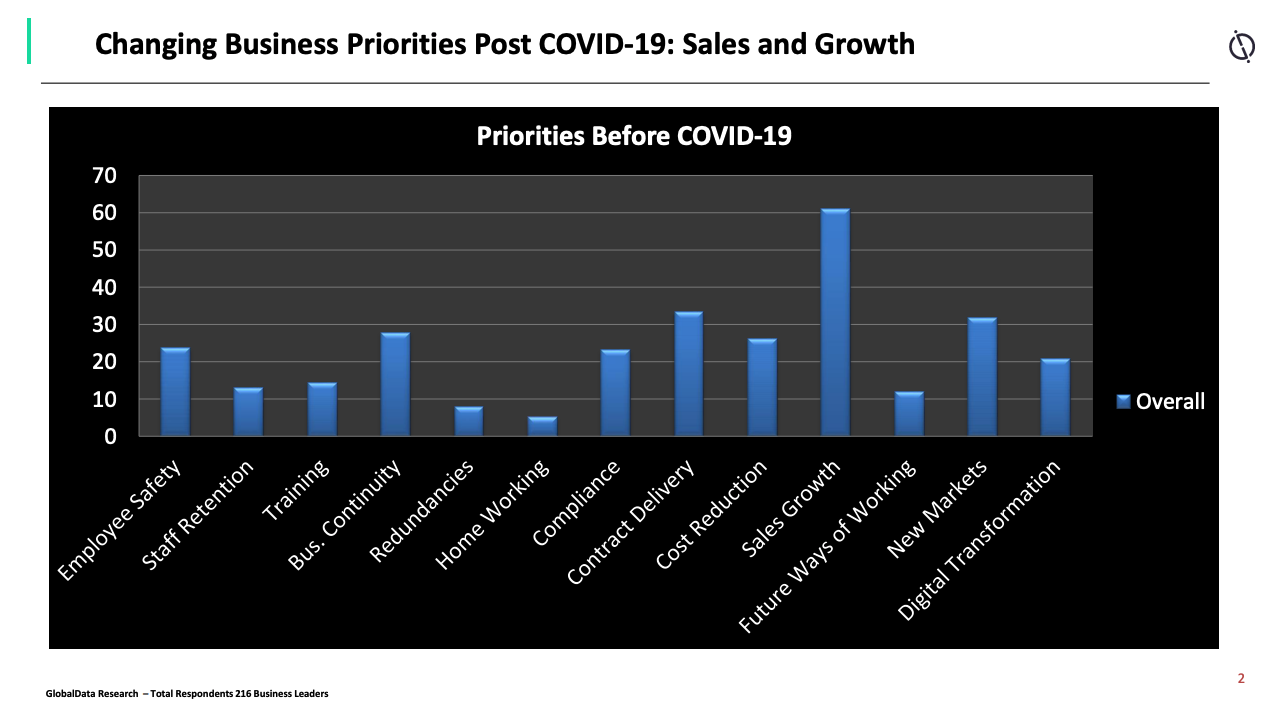 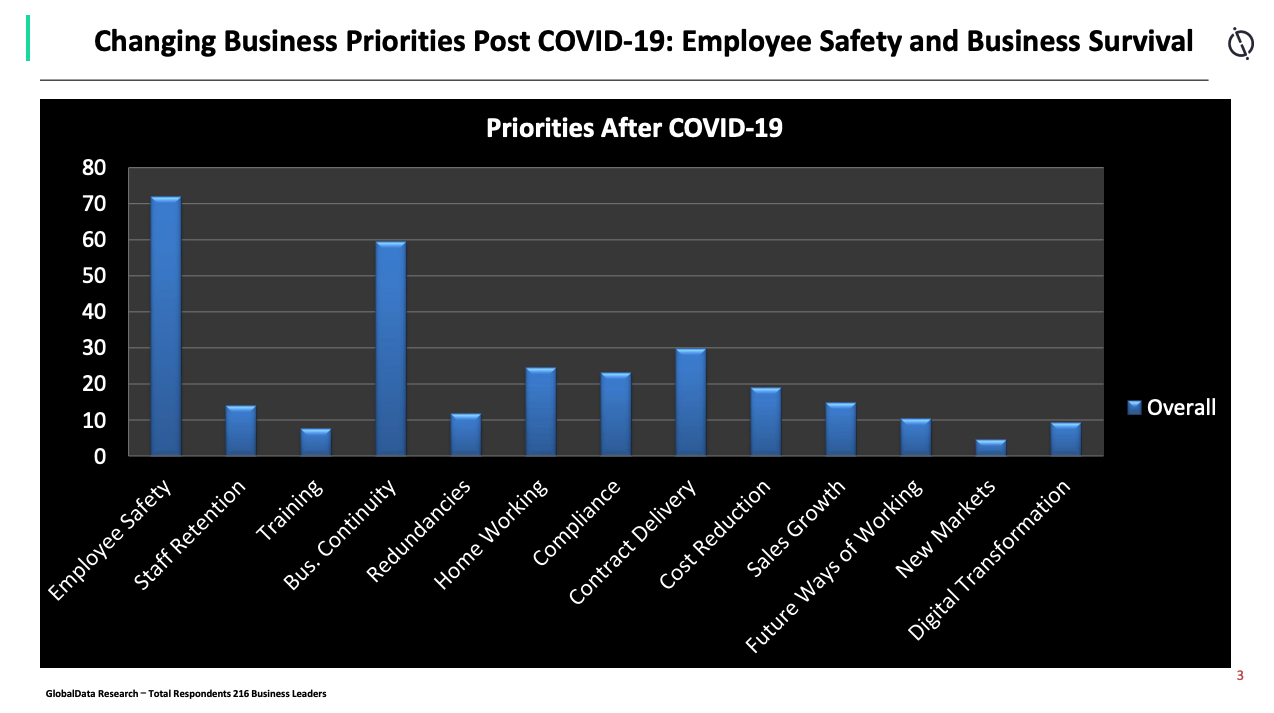 “The most notable shift has been in how businesses and business leaders view employee safety,” he says. “It has become first and foremost in their thinking. Secondly, their focus on survival and business continuity has moved up the list. There is, of course, a long way to go to really tell what the true impact of COVID-19 will be.”

Of the many exciting developments happening in the world of networking, one, in particular, was highlighted by John Apostolopoulos, VP and CTO, of Cisco’s largest business unit; Intent-Based Networking Group & Innovation Labs: “The Federal Communication Commission (FCC) has opened up the 6GHz WiFi band for unlicensed use, which is awesome because of WiFi6’s 1200MgHz-wide spectrum. We believe this huge amount of spectrum will open up a whole new set of applications.”

The challenge of enjoying seamless WiFi access wherever you are – at home, in the office, at an airport, in a restaurant – may soon be solved with Open Roaming, believes Apostolopoulos. “Open Roaming is currently being standardized by the Wireless Broadband Alliance (WBA) and will allow automatic and secure onboarding on a WiFi network. The WBA has also just announced plans for a single global federated WiFi network. You will be able to easily and securely get on a WiFi network wherever you are in the world.”

Bob Friday, CTO and co-founder of Mist, a Juniper Networks company, points to Cisco figures showing that 70% of all internet traffic is on a wireless network, with 50% of that on WiFi: “Over my career, I’ve watched WiFi go from a ‘nice to have’ to a ‘must have’,” he recalls. “When Intel put WiFi into laptops – that’s when it became vital for the enterprise. We’re now seeing a paradigm shift to where WiFi and wireless are really becoming business critical. We’re seeing spectrum regulators respond to that with more unlicensed spectrum.”

The other major area of unwired innovation, one that’s happening right now, is in the world of 5G, argues Kevin Deierling, SVP, NVIDIA Networking Business Unit: “5G is not getting new spectrum, we just need to use the spectrum that we have more efficiently,” he claims. “And to do that, a tremendous amount of technology is involved in the baseband codecs. That’s where companies like NVIDIA come in with GPUs. It’s about building something that’s highly distributed, that’s software-defined and hardware-accelerated. 5G at the edge is going to be a huge play and latency is critical.”

The edge of the network seems to be another place where the heat is on, in particular with advances in the cloud edge and in the optimization of the application experience.

“The big picture is that you’re no longer really programming servers,” argues Deierling. “The new unit of computing is the data centre, with distributed applications running across many of them. Instead of a giant centralized data centre that has 10,000 computers, you have 10,000 data centres at the edge. The edge has to be cloud-native and secure. At the edge, everything is untrusted because you’re plugging in cameras and devices that you simply have no control over. There’s no security guard the way there is in a centralized giant data centre.”

To that, Cisco’s Apostolopoulos adds the point that what people really care about is not networks but the applications that run over them: “The question is how can we achieve what application developers and DevOps people want. Historically, this has been a troubling problem because DevOps people try to describe what they want to do to the NetOps people, and then their ops people try to put it in the network and so forth. But that takes a while and isn’t automated.”

Apostolopoulos believes that a large part of the benefit of automation lies in assurance of network uptime, answering questions that network managers have been posing for decades: “What is the problem? Where is the problem? And then how can we easily fix it. Historically, this was done by humans who would detect if there’s a problem. Humans would also try to diagnose it. Now we’re using much more machine learning to help us quickly detect that problems exist. And using things such as machine reasoning we can do root cause analysis and figure out specifically what is causing the problem. Both automation and assurance I think are really important for us for successful businesses.”

Mansour Karam, President and Founder, Apstra, believes that while applications are indeed critical, there is a separate issue around measurement of data on the network.

“An interesting problem is how to manage this data,” he says. “We’ve have spent a lot of time figuring out ways to analyze data closer to the source so that you get the insights that are needed in an intent-driven way based on the things that you care about, which highlights the importance of a software-first approach. If you have distributed data centres, what’s really important. is the ability to manage them remotely.”

The value of intelligent network automation through Intent-Based Networking has been highlighted by the pandemic, says Karam: “COVID-19 really emphasized the importance of the network,” he observes. “The networking industry feels a sense of pride but also a lot of responsibility in delivering on networking technologies that allow people to get on with their lives in this crisis. It’s allowing people to connect with their families and be 100% productive working from home. This is all due to networking, and it’s quite remarkable.”

Mist’s Bob Friday introduces the theme of AI-driven network management, as a reality and not as a hyped theoretical possibility: “Are we at the point of improving operational efficiency and achieving the savings that go along with that?” he wonders. “Are we at that point? At least, through AI, there’s no limit to what compute and storage can bring to bear on a problem now.”

So with GlobalData’s research into enterprise IT priorities showing digital transformation down on where it was last year, does Caron consider this a cause for concern?

“My judgment is that you have to look at it short term, mid term and long term,” he believes. “Ultimately, this crisis is like a landmark event in the concept of the digital economy and digital transformation. Businesses that weren’t much about it before certainly are doing something now, at least in terms of how digital transformation applies to their own employees, or how it applies to their e-commerce platforms, or customer interaction. Our figures showed that the capability to spend money on transformation now is limited right now.”

“How can an organization in today’s world, with a pandemic, survive without being digitally transformed?” wonders Karam of Apstra. “Everything that’s physical is going away, and you’re doing everything virtually. If you want to buy something, you’re not going to the store. Of course, as Gartner says, you’re three times more likely to fail in your digital transformation initiative if you don’t transform your network. And so I think that indirectly a lot of enterprises today are contributing to digital transformation by transforming the network, making it software driven. They’re automating it, which at the end is the foundation for digital transformation. If an organization doesn’t digitally transform, they lose their ability to compete. From 1954 to 2000, 88% of the companies that were in Fortune 500 then are no longer in existence today. And I see that the cycle is accelerating and with the pandemic, we’re going to see it accelerated even further.

Deierling of NVIDIA believes that so fast moving are global events right now that what people were thinking in March and what they were thinking in April is potentially quite different. He pointed to the wealth of events that rather than being cancelled have simply gone online: “Digital transformation is actually happening in a big way. I think that people pivoted from fear. When we first went into lockdown people worried ‘How do we keep our business running? How do we keep people informed? How do we engage?”

Caron of GlobalData agrees that what’s happened in the past few months is really just an acceleration of things that were already happening: “The term ‘digital transformation’ has maybe been losing popularity, because so many people are engaged in it already. The past couple of months has really made every business a digital business. If they are not digital they’re out of business.”